Tracheal Stenosis and options for treatment 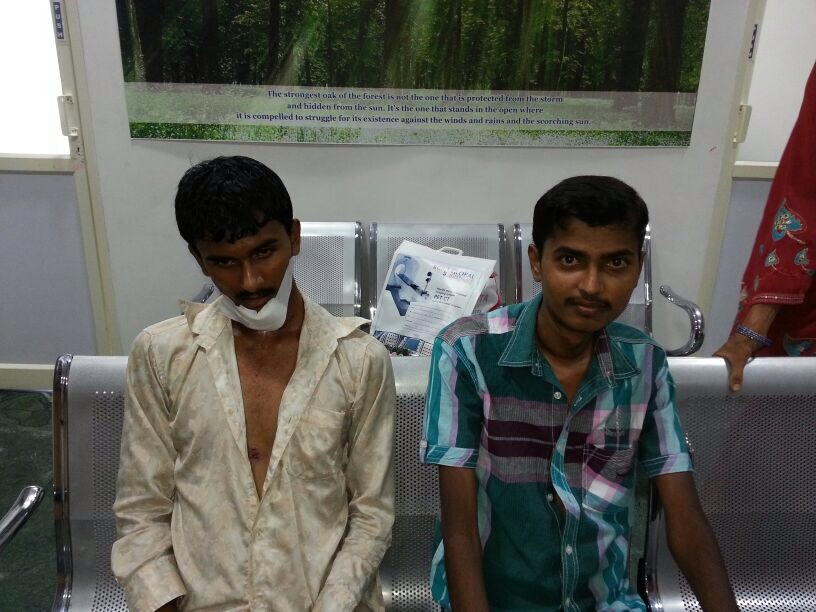 Above picture shows two patient of tracheal stenosis post treatment sitting by side of each other and having a good normal breath without the tracheostomy tube. Earlier to this a month ago, both of these had a hole in neck (tracheaotomy) through which they would breathe.

One of these boys consumed poison on the night of Shivarathri and was shifted in an unconscious state to a nearby hospital near Mysore. Following this he was admitted in hospital and intubated kept in icu for 7 days and later in ward for another week. He was discharged after this when he developed difficulty in breathing a week later. He was then again admitted in the same hospital for few days and treated with medicines. When this was not resolved they suspected narrowing of airways called tracheal stenosis. Following this patient underwent EMERGENCY TRACHEOSTOMY done (hole in neck to breathe). CT Neck done showed tracheal stenosis and hence referred to higher centre. At this point patient was unable to breathe through the nose or speak and breathing was done through a tube in neck.

He visited our to BGS Global hospital and was operated on 18-9-2013 tracheal resection and anastomosis. In this rare surgery the narrowed part of air pipe (5 tracheal rings- 10 cms) was removed and the voice box dropped below and air pipe attached to lung lifted up to compensate for missing airpipe.

Following the surgery patient was able to speak on 2 day and communicate with his family and friends. He now does not have a hole in throat through which he breathes and speaks normally.

The trachea (windpipe) is the airway that leads from the larynx (voice box) to the bronchi, which are airways that lead to the lungs. Tracheal stenosis is a narrowing or constriction of the trachea.

Most cases of tracheal stenosis develop when the trachea is injured after prolonged intubation — when a breathing tube is inserted into the trachea to help maintain breathing during a medical procedure — or from a tracheostomy (surgical opening of the trachea).

Tracheal stenosis can also develop from a number of other causes, including:

Tracheal stenosis can also develop as a side effect of radiation therapy when administered to treat a tumor in the head or neck.

Tracheal stenosis can develop slowly. Early signs and symptoms may be mistaken for a variety of other disorders and may delay treatment.

Tracheal stenosis can sometimes develop as a result of an underlying medical condition. In those situations, doctors will focus on the other issue before treating the stenosis. Surgery is an option for treating tracheal stenosis, depending on the exact location and extent of the stenosis.