A note from an inspiring mentor......


A VISHAL (MEANING VAST) JOURNEY WITH REGARDS TO DE-ADDICTION
Gopal Krishna Gokhale is one among the tallest personalities in our country. He was a major inspiration and guide for Mahatma Gandhi as well. In fact, it was Gokhale, who asked Gandhi ji to tour India understand more about it, after the latter returned from South Africa. Gokhale did encourage many volunteers to indulge themselves in many constructive works through the Servants of India Society. He also served as a member of Legislative Council during the erstwhile British regime. His suggestions as the member of Governor General Parishad are remembered even today. During one such Parishad meeting, there was a proposal to export opium, which was grown in abundance along the Indian border, to China to increase revenue for the country. Gokhale strongly opposed the move and said it was shameful to earn revenue by pushing people in
neighbouring country to addiction. We should never forget these words.


It’s a known fact that tobacco consumption is a highway to cancer and several lives are being lost in this
addiction. In India alone, lakhs of people are taken to death following tobacco consumption leading to
cancer, heart ailments and respiratory problems. Governments are spending money worth crores to give
treatment to people who are suffering to due to ill-effects caused by tobacco. Since, most of the advanced
hospitals in our state are under private control, people hit by such diseases have to shell out money from
their pocket to get the cure. Also, government is spending crores to open units specialized in cancer, heart
and respiratory treatment at regional level. If proper preventions are taken, financial losses and human
resources, especially those of youngsters, can be saved.


If we compare India with the global scenario, the number of people suffering from oral cancer is more here.
Every year at least 75,000 to 80,000 are taking ill due to oral cancer. Interesting fact is that 90 per cent of
the oral cancer cases are due to chewing tobacco. The cigarette has around 4,000 harmful chemicals out of
which 90 are capable of causing cancer. In chewing tobacco, there are 3095 harmful chemicals of which 28
can cause cancer. As per the recent statistics, there are 1.28 crore people indulged in tobacco consumption
in our state. The financial losses caused due to tobacco consumption are huge compared to the revenue
generated through the sales of tobacco products. Same is true if one compares the jobs created by the
industry. However, the greatest loss due to tobacco ill-effects has been the number of young lives being lost
due to this addiction. It is sad to see youngsters ruining their lives in this form.


One fine day, I was sitting in front of my house listening to grievances of people of in the constituency, I
represent. A youngster arrived there along with four people. When he explained about the ill-effects of
tobacco and introduced people with him, I got a shocker of my life. Durgaiah, a farmer by profession, was
one among them. He has lost his sound box due to prolonged chewing of tobacco and finds it very tough to
talk. Thanks to some instruments in his throat, with the help of which he has utter few words. Another illfated
person was Ramesh, who was sitting with dark spectacles on. When he removed his glasses, I could see
he had a big hole in place of the right eye. Doctors had to remove his eye ball has it was hit by a form of
cancer due to tobacco consumption. Another woman had lost power in her digestive organs due to tobacco.
I decided to support him and take part in tobacco control activities after that youngster explained me about
his fight against the ill-effects of tobacco. As a minister, I participated in a two hour awareness programme in
Suvarna News and interviewed several cancer patients. It was a unique experiment.


It is because of sustained efforts of this youngster, the state government has banned gutka. This is a major
step in the struggle of tobacco control. And the youngster is none other than Dr Vishal Rao, who is a cancer
surgeon with the BGS Global Hospital. Dr Vishal is least concerned about the revenue he can generate from
his profession but focused more about preventing the cancer itself, which he believes is more important. As
we all know, there will be a huge and strong lobby behind every industry which earns generates good profits.
And the lobby doesn’t allow any person or organization, which pose threat to the industry. Dr Vishal stands
special in his fight against tobacco as he has not surrendered himself to the influence of any such lobbies or
related threats. His attention is only towards protecting the public health.


One thing I don’t understand about Dr Vishal is how he takes out time, from his busy schedule of surgeries
and patient interactions, for this movement of public good. Dr Vishal was influenced by the words of a
senior person at Tata Memorial Cancer Institute in Mumbai, where the former took his masters degree. That
person did tell him that it was important to take steps to prevent cancer than opening hundreds of hospitals
to cure the disease. When Dr Vishal saw tobacco victims, coming to home with no interest left in life, he
decided to take up the movement. Having said that Dr Vishal never raised slogans against the government
and hit the road with protests. Instead, he worked closely with several government departments, including
police, health and education wings, to achieve his goal. Due to his sustained efforts, police department is
playing a major role in implementing tobacco control measures. His training programmes are giving good
results in creating awareness among official ranging from senior cops to sub-inspector in different districts.
This youngster’s contribution is including tobacco control cases in the monthly crime report of the police
department, should also be lauded.


Dr Vishal, who is active through programmes like Tobacco Free Bangalore, Voice of Tobacco Victims and
Freedom from Tobacco-Bangalore Unites, was also instrumental in collecting signatures of over 1,000
doctors to support Gutka ban. His role was also there in implementing the COTPA 2003, which came into
effect about 10 years ago. This young doctor has proved that nothing is difficult to achieve if a person
focuses at his aim and dedicates his life towards achieving the same. Dr Vishal, who personally believes in
spiritual values, is happy about whatever he is doing and says that it was due to god’s blessing that he is in to
it. As individual, If we are able to de-addict even a single relative or a friend from tobacco ill-effects, we will
be doing our best to support Dr Vishal’s activities. Let’s think and act in this regard from today itself! 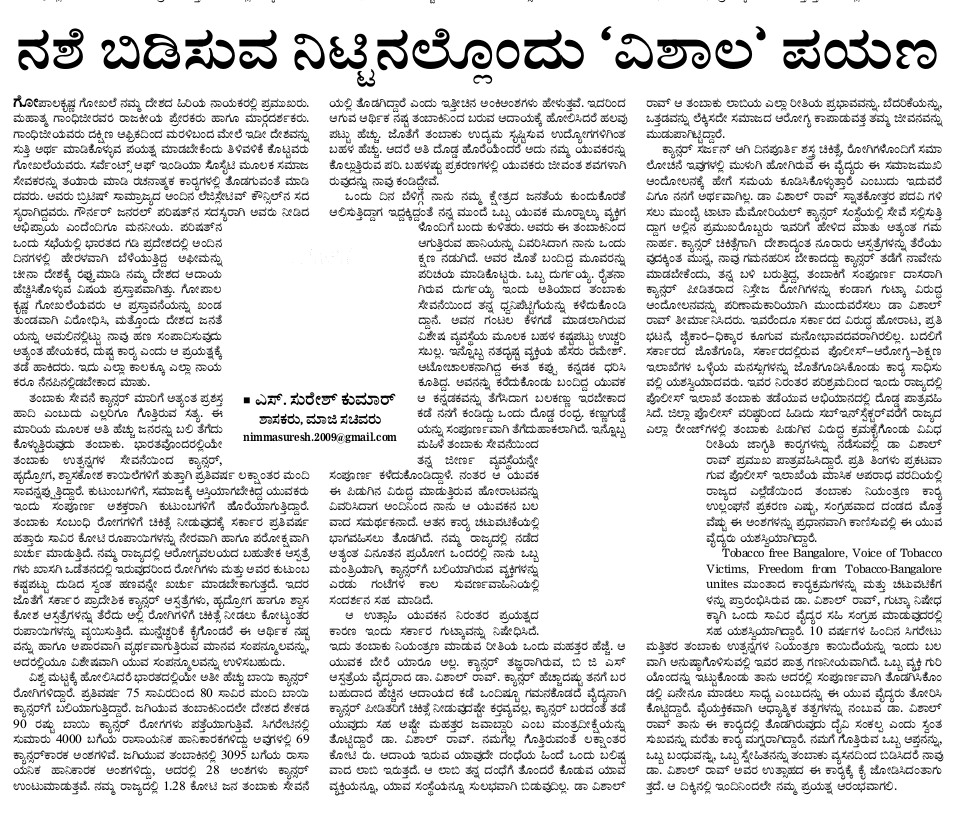 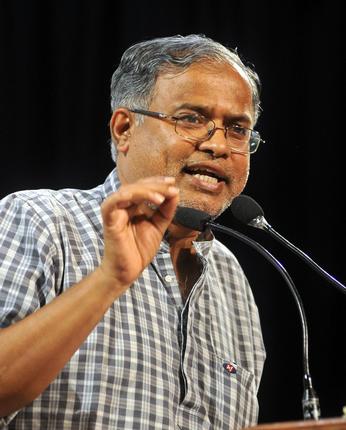